Creating a Podcast in Audacity

Recording with Audacity is quite easy. These two tutorials can help with the hardest parts.

Setting up a USB microphone

First, if you are using a laptop you might not need to hook up a microphone. If you are using a USB mic, though, see this tutorial before you start Audacity to make sure the settings are correct in Windows.
Recording in Audacity

Open Audacity and record your narration or other audio. It's very simple to record--just press the Record button to start and the Stop button when you are done.  Save the project file when finished. 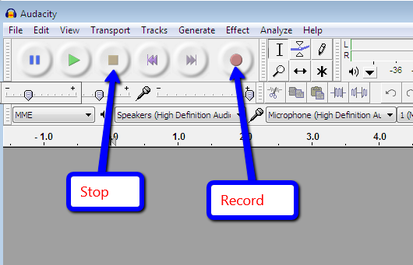 
Then this tutorial below will show you the basics of editing and exporting your podcast.

Two things to note:
(This video does not contain audio. The text on the screen can be used to help you move forward or backward quickly to find the parts you need to watch.)