This collection of tips is for teachers and students. Two videos at the bottom of this page show how to:

For Teachers:
1)  Set expectations at the start for requirements and the project timeline. I suggest a one page assignment sheet that answers these questions:

2)  Keep realistic, tight deadlines. Set the time you want students to use for planning, recording and editing and stick to it no matter what. Many students will take far longer if they are allowed to. Let them know they must work outside of class if it’s going to take longer.

3)  Share the work when students are done. Students should share the videos with you in Google Drive. Share the best ones with Mike so we can put them in some public places such as the announcements, signs in the hallways or on the GISD video portal.

4)  Read over the list of student tips below and be sure students are aware of the ones you consider important for the current project.


For Students:
1)  Be realistic when planning. Unless you’ve created videos before, don’t plan special effects or anything that will require advanced editing.

2)  Use one camera if at all possible. Using multiple cameras makes it harder to get all your videos in one place and file compatibility can be more of an issue. Even better, if you use an iPhone, iPod or iPad, edit right on the device with iMovie.

3)  Don’t plan to use music you can’t easily access and legally download at school. Part of any tech project is to learn the rules of copyright and fair use. It is not legal to use someone else’s song in your videos unless they have given permission. Here’s my favorite site for downloading free music. The composer gives permission for any use as long as you credit him in the video as he explains on his site. http://incompetech.com/music/royalty-free/

4)  When it’s time to edit, bring any USB cables that work with your camera so it’s easy to transfer files. When all else fails, it’s possible to upload your videos to Google Drive, then download them to the computer you are using for editing. This will take awhile if you have long videos, though, so cables are best.

5)  Plan in detail. It's more fun to start recording, but poor planning will result in either lots of frustrating editing or a poor final video. Good planning includes a detailed script for all dialogue or narration and a storyboard showing the basic camera views for each shot.

7)  Hold your camera, phone or device in the landscape position. Not only is this a pet peeve of mine, if you get this wrong it immediately makes your video look amateur. Shoot with YouTube and the big screen in mind so your possibilities are not limited. Here’s a graphic I made based on something I found from another teacher who was frustrated by this: 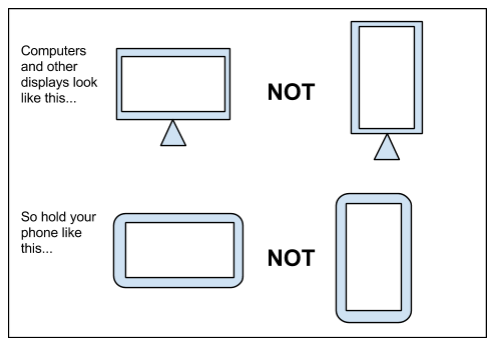 8)  Think about what the viewer is seeing and break up the scene accordingly. Does it make sense to stand back with the camera and just record the whole scene as if it were a skit? Or would different camera angles throughout make it more interesting? Would close-ups of certain action help tell a better story? Is there anything in the background that will distract the viewer from what is most important?

9)  Listen before recording. Is there background noise or bad acoustics that echo when actors talk or make other sounds? Choose a quiet location.

10)  Listen carefully when you are recording too. Be aware that a distracting noise (squeaky chairs, doors closing, etc.) while someone is saying a line can't be removed later. We often block these things out easily when listening to someone in real life, but when watching a video they are impossible to ignore.

11)  Speak clearly when being recorded. Probably everyone involved in the video knows the script and knows what is being said, so everyone understands the lines. The viewers don't have that advantage. Pay attention to how fast you talk, how loud it is and whether or not the words are distinct.

12)  Record too much rather than not enough. Start recording several seconds before action will start. If someone will say, "Action," or otherwise alert everyone to start, be sure they wait at least a second after the camera has started before they cue the actors. It is so easy to trim a few seconds off the start or end of a clip in editing. Compare that to the case when the camera person turns off the camera immediately after the last line or the actors start talking as soon as the camera starts. Those make for bad edits later.

13)  If you have the time, get two good takes of each shot. You can overdo this, but generally if everyone finally gets a good performance once, the next one will be even better. During editing it can help a lot to have a couple choices for the take that will end up in the final video..

14)  When acting a scene, don't look at the camera or the people behind the camera. It is very common for actors to look to the person working the camera as if to say, "Did we get it right?" Those looks can ruin an otherwise great take and sometimes you won't notice them until editing later.

To sum it up, remember you can save a ton of time in editing if you…


Video Tutorials
This first video shows how to edit a simple video in Windows Live Movie Maker. The second shows how to easily share it using Google Drive.